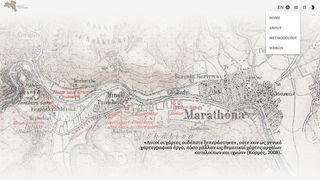 YEAR
2021
GRANTEE
Dipylon Society for the Study of Ancient Topography

Using the valuable cartographic work Maps of Attica by Ernst Curtius and Johann A. Kaupert, DIPYLON NPO is implementing the innovative research project “Karten von Attica and GISc: Antiquities and Topography of Attica in the Age of Digital Humanities’”, funded by the John S. Latsis Foundation, among others. The project aims at the creation of a bilingual (Greek/English) and open source digital webGIS platform, which will comprise a well-documented recording of all archaeological and cartographic markings of the built environment of the 19th century, included in the Maps of Attica and linked to the translated accompanying text Explanations of the Maps of Attica.

In particular, by overlaying multiple levels of geospatial data (cartographic evidence, historical maps, excavation plans, aerial photographs) on a single digital map, it will be possible to reconstruct and present the ancient topography of Attica (monuments, burial remains, road network, countryside, etc.). This project is of particular importance, insofar as, for the first time, a historical map is subject to digital processing using cutting-edge technologies (Geographical Information Systems and web-mapping), offering new possibilities for research and management of the cultural heritage of Greece and contributing to the development of Digital Humanities.

Browse the Maps of Attica here.